The blog below was written as part of the Blue Sky Riders All Access Pass content. Kenny wanted to share it here with all of our KL Connection members, too! 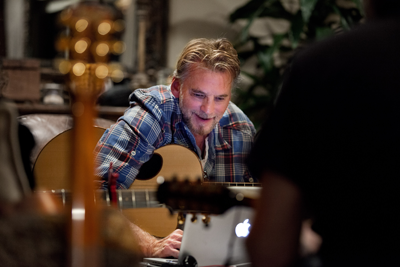 So here’s a photograph of me immersed in the writing process with Gary and Georgia; a quick glimpse into our writing room. Truth is, I’m probably caught here taking dictation, trying to catch Gary’s barrage of words flying through the room. (Writing with Gary is like taking a Masters Class. You gotta be in the zone just to keep up.)

The camera here is manned (womanned?) by Karen Castillo Farfan, a talented filmmaker in Santa Barbara, CA. We enlisted Karen to chronicle these writing sessions for our “All Access Pass” members, a tier we initiated with our Kickstarter campaign last year. Folks who bought in get to watch us write, rehearse and record much of the coming CD. The idea was to pre-sell the CD by bringing the audience into the intimate process of creating it.

But it’s become a lot more than that.

When Gary, Georgia and I decided to embark on our “All Access Pass” madness, we set a major challenge into motion. (That’s code for, Holy crap!)

Question: Can you really write music with a camera rolling, (make that 4 cameras rolling!) and not feel insecure, intimidated, and at times defensive? Stay tuned folks, but I can say: “Yes…and no. But so far, so good.” It’s amazing how, after only an hour or two, you simply go about your business and forget there’s a camera in the room. (Plus, knowing each of us ultimately has creative control of what goes out into the world helps a lot, too, though to our credit, we haven’t exercised that right.)

And the good news is the three of us are committed to telling the truth, not only in our music but also on videotape. That’s a giant leap for mankind, I gotta tell ya. Once we decided that this would chronicle what we do and who we are at this stage of our lives, “warts and all,” we’ve been amazingly willing to “get naked” on camera every step of the way. (Well, Gary’s been maybe a bit too willing, but Georgia keeps him in check, thank God.)

I think the All Access folks will be very pleasantly surprised at how intimate a look their “Pass” has become. Not only will they get to see how a song evolves within the esthetics of these three, shall we say, intense writers, but they’ll also see how we resolve conflict, and how we get through personality clashes that can get in the way of creativity if left to run the show from behind the curtain.

I think AAP members will be especially riveted to our process when they see what happened during the writing of “The Rodeo.” Much praise goes to Georgia for her courage and willingness to be so incredibly vulnerable on tape, even having the presence of mind to take Karen aside to do her own private interviews through her tears!

Ego clashes are often referred to by younger acts (aren’t they all?) as “creative differences,” and too often they can blow a band apart. That’s because young acts are struggling to find their individual voices in the world, and a band inherently demands you mesh your voice with your partners’. But I believe that if we are willing to stay in the heat of those differences, with trust and respect, to hang out in the discomfort for a while and simply talk about it, there’s almost always a “third way” that reveals itself, (or in our case, a “fourth way.”) We’ve come to refer to that fourth way as the Blue Sky Rider (Writer?) in the room.

When I first thought about starting a band with Gary Burr, my primary motivation was to have a writing partner I could "stay in the trenches" with, that is: stay creative, go to school on, maybe even record with, and most importantly, have fun with. Since starting Blue Sky Riders with Gary and Georgia, I’ve experienced all that; we’ve had a blast writing some really fine tunes and recording in Nashville for our new “Why Not” CD.

But I’ve also been experiencing some of the things I’d forgotten about from my L&M experience, the stuff that inevitably happens when you give up creative control. It’s called “compromise,” and at it’s best it creates something you never would have alone. At the same time it can be very frustrating. By it’s very nature it can never be what you would have done alone. Sometimes it can be for the better, maybe even most-times, but sometimes… not so much. The thing is, it’s hard to know which of those sometimeses it is in the moment you’re doing it.

The interesting thing about autonomy is that after 20 or 30 years of it, of relishing in my total creative control and freedom, about 5 years ago I inexplicably started to wish for other ways to write and approach my art, to wonder what might keep the juices flowing. (I guess being in a band is like childbirth. You forget about the “pushing part.”)

I suppose the big question lurking within me these past 8 years has been, “Knowing what I know now, how will I deal with the alchemy of relationship?” So far, I think I’ve been dealing with that pretty darn well, considering my long history of creative autonomy. But secretly I've gotta admit, that’s still my biggest challenge. “Is what I get via partnership worth what I give up?” (Now that the All Access Pass videos are on the street, that question will finally be answered.)

Those of you who watch the writing of the new tunes via the All Access Pass will see firsthand how challenging that can be, not only for me but for Gary and Georgia, too. We’ve all got EGOS people, and you have to have a pretty big one to even be IN this business in the first place!

Not too long ago, when BSR first launched, interviewers asked us, “What advantage might you three have over younger bands?” Perhaps one: Just maybe, our maturity will help us see our differences as our strengths. That one thing… that’s huge.

Maybe I’ve learned who I am as a soloist, so I’m ready again to merge with other talents to create something new? That’s called “collaboration.” And it must be time, or I wouldn’t be so “called” to do it.

That’s the beauty of being in a band. Or, for that matter, of being in any relationship. It can be a tug of war sometimes, but if you’re with the right people, people you respect and admire, the ultimate outcome can be seriously rewarding. And fun too.

I think in the long run we’ll be very glad we turned on the cameras to chronicle this moment in time. It’s such an intimate look into the creative process, into each others psyches, into partnership, and ultimately into relationship.

Maybe we shouldn’t watch any of it till it’s done? Ya think?