But from the second we started singing, with just the opening word "Help," we were stopped in our tracks by the still unexpected power of our vocal blend. We just sat there for a minute and smiled at each other. I've gotta tell you, it's a sweet surprise every time we sing together. What blind luck to have discovered each other! Or, perhaps as the song says, there is no difference between "blind luck" and "guidance?" Guided by stars?... Perhaps.

When I first called Gary, a bit over a year ago, I knew this was going to be a rush of new inspiration and creativity, but I honestly had no idea how totally enveloping this project would become, or certainly how emotionally challenging. I'm lucky I didn't. Ignorance is still bliss. Amen and hallelujah.

Past experience has tried to teach me that when I truly jump into something, I go in with both hands and feet. That's just the way I'm made. "Once more, unto the breach!" or, "are we not Sparta?" should be my rallying cry. Crazy, maybe, but what a ride it's been!

It was clear to me from that day, that this would be my last sojourn into this strange, fantastic, illogical world of pop music, and I saw the rare opportunity to chronicle this passage, for better or worse, for all the world to see.

When I first brought up the idea of blogging this journey to Gary and Georgia, I knew that these open-journal entries would have to contain all the emotional aspects of the ride, chronicled as honestly as possible, in order to maintain credibility and keep us "alive" as "characters in this play," relatable and accessible. So let me warn you now, sometimes Rock 'n Roll just ain't pretty.

Whenever we open ourselves up to "relationship," we run the risk of becoming human beings; of becoming "real," to quote the Velveteen Rabbit. No...it's the inevitability. And for some reason, I still believe it is a risk worth taking.

As Blue Sky Riders become more and more "real," especially as we tour together, I am struck by how much energy it requires from me, and how much energy it feeds into me. Familiarity breeds content? Hmmm... Yes and no. We have become, are becoming REAL friends, learning each other's insecurities and weaknesses as well as strengths, and honoring and forgiving each other for those all-too-human idiosyncrasies. Well, ideally.

I can say that this wonderful collaboration comes with what I now see are my next big emotional challenges, or as Julia used to say, "the hurdles I run to get to myself!" It's as if the day I picked up my phone and called Gary Burr, some part of me said, "I'm ready to grow again." And as the three of us grow closer as friends and as a band, I watch my newest inner battles present themselves to me, and most of them are strangely similar to those I first encountered during my collaboration with Jimmy Messina so many years ago, as a twenty-something. Except that I now have the perspective of a grown man who's been around that block more than once. Just maybe, if I keep my eyes and my heart open, I won't have to run into the same ego-walls I did back then, (and by that I mean my own).  Just maybe.

The recording studio has been my personal sanctuary since I produced "Leap of Faith" in 1990/91. I'd become very comfortable making "Kenny Loggins' Records," being my own boss, making my decisions spontaneously, working from that place of gut intuition, unencumbered by what anyone else might think. (As a good friend of mine cautioned me when I first mentioned I was starting this new band, "Kenny, most people leave bands to go solo!)

But isn't the point of forming Blue Sky Riders... NOT just to make another KL CD? Isn't it about being "in a band?" Then it must be about realizing the creative experience in yet another way. (As a friend of mine in college said, when the acid was getting WAY out of hand, "Andale!!")

But that doesn't mean my ego will just go along quietly. You see, in the past, my old habit has been when I ask my mind to be patient and just listen for a while, the part of me that controls my creative inspiration just leaves the room, backs off, rescinds all authority. (My dad used to call me "The All-Or-Nothin'-Kid." I wonder why?) Well, that story won't fly here. That is simply no longer acceptable.

So, Challenge #1: I must stay present at all times, especially in a creative situation that might too closely resemble (aargh!) "confrontation," my old nemesis. Historically, I must admit, the confrontational situation has never been my favorite place to be. But that clearly is THE lesson this time around, eh? To stand strong, but with an open heart, trusting the creative instincts of the people I've chosen to collaborate with this time around, but trusting my own as well. Staying creatively present. When to speak up and when to sit back. Tricky business for me.

But you see, this is a BAND, and we all need to be present and accounted for if it is to be at it's best.

And suddenly, as I write this, I realize that my commitment to this band is a commitment to being fully, consciously IN relationship, not only to them, but to myself. (Seems I've heard this song before. ?) 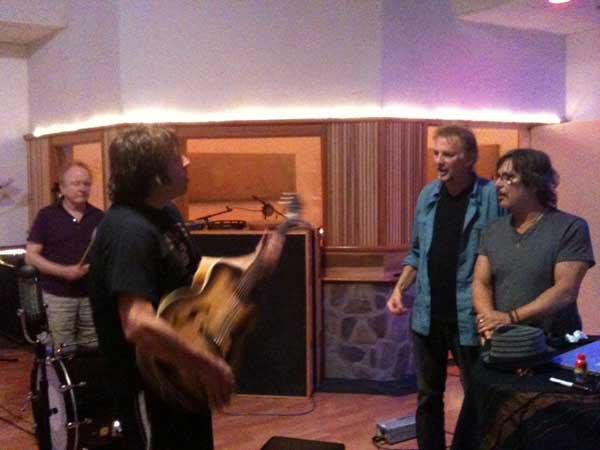 A few weeks ago...We're in the studio in Ojai with Peter Asher, it's our first day, and things are going v e r y   s l o w l y. Recording gear isn't working correctly, the clock is ticking, money seems to be pouring out the front door with little to show for it, and the stress is rising too, like the tide in a storm. But I'm pretending I don't notice it, like everything is just fine, full steam ahead, and I press on in my moment of creative myopia, jumping into the inertia with "a brilliant idea,"

"Let's try this one with an electric guitar instead..." I say as I hand the white Duesenberg to Scott Bernard, stripping away his acoustic guitar just as we're about to start a take of "Another Spring." And Gary, frustrated by this unanticipated, incomprehensible interruption, says to me, "Why?"

Why? I am stunned for a second. Picture KL as "deer in headlights." No one has asked me that question in the studio in 30 years. Time has honed my studio-style into something like, "Yeah, let's just try this shit out and see what happens."

And really? What CAN the answer to "Why" be?... "Cause...I want to...cause I have a hunch...cause...huh?..." In the rush of creativity, I'd come to believe that all discussion is mostly unnecessary and in the way of the creative juices. Music is music. Words are words. And ne'er the twain shall meet...

And the point is well taken. Gary IS here, and he has good instincts too. He's produced a number of well-received Country albums (I still call 'em "albums") in his time. And let's not forget that Georgia is a creative force to be reckoned with as well. And wait...Peter Asher is no slouch either. Hmmm...This is different. This is challenging.

How do we find a new way to collaborate that honors each of our creative urges, while keeping this production within our modest budget? After all, this ain't "Dark side of the Moon," ya know. (And by the way, where the hell did my sense of humor run off to?)

The other day we hit a hard spot in the studio around a technical disagreement, and the three of us just sat silently in our separate chairs for maybe 15 minutes, acting as if nothing happened...nothing at all...saying nothing out loud...staring into our individual laps... till I said, "I feel terrible right now. My stomach is twisted into a knot."

"Me too," said Georgia and Gary in unison.

I admit, I was surprised that they felt it too. I thought I was "just crazy." "Hyper-sensitive." "Too attached to "my way" of doing things." Blah. Blah. Blah.

I think my reflex-response to admit my uneasiness came from my "personal training" during my marriage to Julia. ("Just tell your emotional truth and see what happens.") 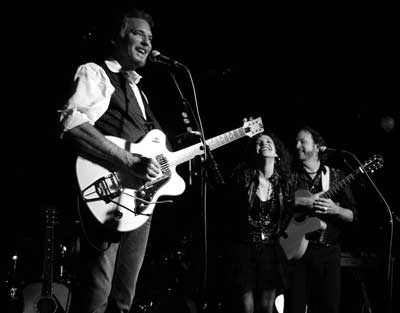 Well, the weirdest thing did happen. We started talking again. The tension lifted and we began to see a way around this seemingly "creative impossibility," a possible compromise that just might make us all happy and put us back on track.

Will simply speaking what we're feeling in the moment work every time? Don't know, but it's a place to start.

I recently read an interview with Lindsey Buckingham (of Fleetwood Mac), where he said how much fun he'd had in the studio recently, making his newest CD, all by himself! He said something like, "I didn't have to put up with endless discussions and rationalizations. Being in a band is the slowest, most frustrating process ever."

And maybe he's right? Maybe the band-animal is just made that way. Democracy IS slow. "So it goes..." said Kurt Vonnegut. "So it goes."

But let's not forget about the word "synergy" either, "when the result is greater than the sum of the parts." Call it The Beatles. Yes, call it Fleetwood Mac. And call it a few hundred other great bands. When collaboration works, it really works!

Like I told GnG, I've already made KL CD's. I want to see what Blue Sky Riders has to say this time.

This is a band.

Posted by miranda in Blog